Romanian Center for the Promotion of Trade and Foreign Investments

Ministry of Regional Development and Tourism

As a result of the complex geological structure and the varied geography, the West Region has rich and diverse underground resources, of which we can mention: liquid and gaseous hydrocarbons (oil and natural gas), especially in the plain area, ferrous and non-ferrous ores prevailing in the hill and mountain regions, coal basins grouped especially in the counties of Hunedoara and Caraş-Severin, and construction materials.

The geological and tectonic structure of the West Region has facilitated the exploitation and utilisation of the rich thermal, mineral, and still waters in the region, which have been known and used since very old times. The spa potential of the thermal waters is utilised in the following nationally and regionally popular resorts: Băile Herculane (Caraş-Severin county), Geoagiu-Băi (Hunedoara county) and Moneasa (Arad county), but also in some smaller resorts of local interest. The mineral waters of Lipova (Arad County) and Buziaş (Timiş county) are intensively utilised, as well as the still water from Băile Herculane.

The agricultural potential of the West region relies on the fertile agricultural lands, especially due to the chernozem soils, which, being rich in humus, are among the most fertile soils for plant cultivation. The large availability of this kind of soil in the West Region, as well as its high fertility, has turned the Banat-Criş Plain into the second largest agricultural area of the country.

The land use in West Region Romania, 2007 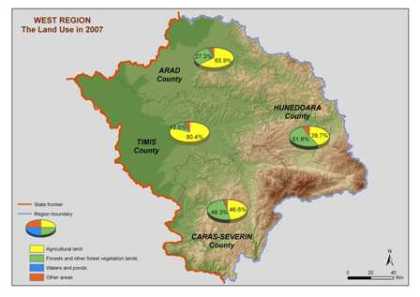 4. Important forest resources and the development of the wood industry

The West Region has significant forest resources, above the national average, mostly in the hill and mountain areas, namely in the counties of Hunedoara and Caraş-Severin. The high percentage of forest areas in the mountains has facilitated the development of an intensive industry with wood processing facilities at the base of the mountains, laying the foundation for the economic development in that area.

Location: in the western part of Romania - to the north of West Region. The city is only 60 km away from the border with Hungary.Owner: Arad City Council Description of the Arad West Industrial Zone·...